Buyers coming into the Market in February!

The Canadian resale housing activity in February 2009, was up from seasonally adjusted levels of January, according to statistics released by The Canadian Real Estate Association (CREA).
A total of 28,669 homes traded hands via the Multiple Listing Service® (MLS®) units nationally in February 2009 on a seasonally adjusted basis. That was great news for everyone as the TSX had one of it's better days after this news!
Posted by Doug Pedlar at 10:55 AM No comments:

Those farmers work all year round! 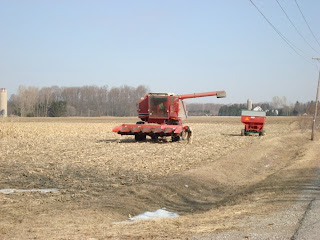 I was down to the Port Stanley area last week and ran across these hard working farmers along Lake Erie, taking their corn off! With the early winter that we had they ran into the snow last fall and here they are finally getting their crop off.
Posted by Doug Pedlar at 3:02 PM No comments:

TORONTO, March 4, 2009 — According to the 16th Annual RBC Homeownership Survey, 65 per cent of Canadians think it's a buyers market right now and more than a quarter of Canadians (27 per cent) say they intend to purchase a home over the next two years, up four points from 23 per cent in 2008 - the largest single year increase since 2001. Additionally, almost half (48 per cent) indicate it makes sense to buy a home now versus waiting until next year.
The RBC survey found that younger Canadians are most likely to spark an upsurge in home sales. In the under 35 group, 48 per cent said they plan to buy, which is up sharply from 36 per cent last year. Renters also appear to be saying they are tired of paying someone else's mortgage payment, with 38 per cent planning to become homeowners in the next two years
Posted by Doug Pedlar at 10:13 AM No comments:

Last month, 480 homes exchanged hands in the jurisdiction of the London and St. Thomas Association of REALTORS® (LSTAR), including 382 detached homes (down 30.2% from February 2008) and 98 condos (down 30% from February 2008). Year to date, 626 detached homes and 158 condos have been sold – down 32.3% and 30.4% respectively compared to the same period in 2008. "Although February sales are down 30%, January sales were down 35%," says Joe Hough, LSTAR President. "And the average residential price is down only 2.4%, compared with 2.8% last month. I think that’s encouraging and shows it’s a great time to buy, especially since active listings are up about 23%. There is a great variety of choice available." There is a good selection of Homes and Cottages on the market right now in the Grand Bend area as well. Interest rates are at an all time low and places are priced right!
Posted by Doug Pedlar at 9:52 AM No comments:

The Canadian Press yesterday reported that The Bank of Canada took its short-term interests rates nearly as low as they can go yesterday, but suggested that may not be enough to rescue an economy downturn that continues to defy projections. The central bank sliced its trend-setting overnight rate half a percentage point to an all-time low of 0.5%. Canada's commercial banks quickly followed suit, cutting their prime rates by half a percentage point to 2.5%, effective today. With rates like this it is a great time to buy!
Posted by Doug Pedlar at 4:03 PM No comments: