The Canadian Real Estate Association has just reported that MLS® home sales were much stronger than expected in the second quarter of 2009, with activity having climbed throughout the quarter and into July. The remarkable recovery of resale housing has prompted a change to the MLS® home sales forecast issued by CREA, for 2009 and 2010.
The speed and magnitude of the rebound in sales activity to date has lifted CREA’s national forecast for the number of transactions to 432,600 units. This represents an annual decline in activity of 0.4 per cent compared to levels set in 2008, and is a significant upward revision from the previously forecast decline of 14.7 per cent in CREA’s forecast issued last May.
CREA President Dale Ripplinger says, “The difference in the resale housing market now, compared to the beginning of the year, is night and day, and nowhere is this more evident than in the West.”
“Low interest rates are boosting sales by returning homebuyers to the market who moved to the sidelines late last year, and shifting ” said Chief Economist Gregory Klump. “Buyers are also shifting purchase decisions forward as they take advantage of attractive interest rates now before financing costs increase.”
Great news for the Real Estate Industry, here in Canada.
Posted by Doug Pedlar at 1:13 PM No comments:

Thanks for the Testimonial

We appreciated all your hard work on the sale of our home on Burwell Road. We are very satisfied clients and would highly recommend you to others. Many thanks for a job well done. Tom & Elouise Perry
Posted by Doug Pedlar at 11:10 AM No comments:

The Canadian Real Estate Association reported that the national resale housing market activity continued climbing in July 2009. Posting the largest year over year gain in two years and the first time on record that sales activity topped 50,000 units for the month of July in any year on record. Great news for the housing industry. It has been busy here in Grand Bend as well with listings and sales.....plus the weather is better and there are more people around the Bend!
Posted by Doug Pedlar at 12:14 PM No comments:

The Beaches are Great in Port Franks 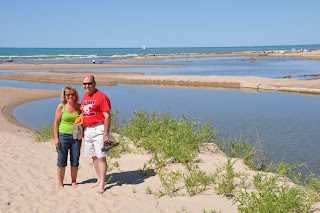 The family was able to get away for a week at our cottage in Port Franks and we actually had good weather! The beaches are fantastic and Jeannette and I spent every night watching the sunsets. Let's hope the weather improves so we can all spend more time enjoying the summer.
Posted by Doug Pedlar at 1:17 PM No comments: