RE/MAX has just brought out "Curbside Marketing", which allows buyers to view properties instantly right on their phone. Price, description and the actual listing will come up on your phone, complete with pictures. Just TEXT the unique number on the sign, (try 25120) to 58888 for instant property information and if you have a smart phone you can get a link to photos and virtual tours, on my mobile website. Try it and if your in the area watch for the RE/MAX curbside marketing signs.
Posted by Doug Pedlar at 12:32 PM No comments:

Improved financial standing among high net worth individuals is the major factor driving strong sales activity at the top end of Canadian housing markets, according to a report released today by RE/MAX.
RE/MAX Ontario-Atlantic Canada and RE/MAX of Western Canada examined 12 major centres from coast-to-coast and found that luxury sales have surged in close to two-thirds of housing markets between January 1 and April 30 of this year, compared to the same period in 2010. Leading in terms of percentage increases over the four-month period were Greater Vancouver (118 per cent) - where foreign investment has also played a major role - Ottawa (59 per cent), Calgary (51 per cent), Halifax-Dartmouth (27 per cent), Winnipeg (24 per cent), Hamilton-Burlington (13 per cent) and Greater Toronto (nine per cent). Six of the seven major cities - with the exception of Calgary - are poised to set new records in top-end activity by year-end. Several are just short of peak levels reported in 2010, such as Victoria, Regina, and London-St. Thomas.
Posted by Doug Pedlar at 10:25 AM No comments:

Statistics released today by The Canadian Real Estate Association (CREA), reveal that national resale housing activity softened in April when compared to March 2011. Seasonally adjusted national home sales activity was down 4.4 per cent in April 2011 compared to the previous month. As expected, declines were largest in some of Canada’s more expensive and active markets, including Toronto, Vancouver, and the Fraser Valley.
Posted by Doug Pedlar at 12:25 PM No comments: 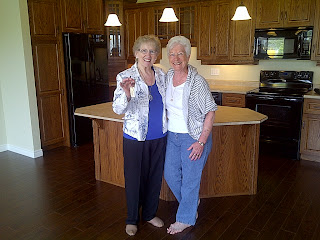 Loreen Collins receives the keys to her unit in Townsend Meadows from Jeannine Campbell. Loreen is moving from her lakefront home in Lake Valley Grove to her new unit in Block One and is excited about moving into the community.
Posted by Doug Pedlar at 9:42 PM No comments:

Recreational Property Report from RE/MAX is on it's way!

Just finished talking to Eva Blay, from Point Blank Communications today regarding the first 4 months of activity here in the Grand Bend area. The full RE/MAX Recreational Report will be out in June but with over 50 areas reporting, Eva has to start now to collect the information. Our first 4 months has been slower with the snowy weather we have been having here in Southwestern Ontario, but as soon as the sun is out and the election is over I would expect our numbers will be comparable to last years for listings and sales. Sales so far are somewhat slower by 15% but the listings are up 30%, so there is a good supply of inventory now available. The starting price for a typical 3 bedroom winterized property is now $475,000, up from $425,000 last year with the highest sale of a lakefront in the past 6 months, over $1.5 million. We are expecting the market to get considerably better in the next 6 weeks as long as the rain stops and the farmers are happy campers!
Posted by Doug Pedlar at 12:44 PM No comments:

The London Free Press reported that the cool, gloomy spring weather helped dampen the real estate market in the London area last month. The London and St. Thomas Association of Realtors (LSTAR) said 750 homes sold in April including 619 detached homes and 131 condos, 23.6% below the sales in the same month last year. LSTAR president Jack Lane noted that April 2010 set a sales record for the month and this years April sales were close to the long-term average. 'When you factor in the persistently poor weather that has plagued our region over the last few months, I think 2011 sales point to a healthy, vibrant market. I predict by year's end, our numbers will be down only marginally from those of 2010,' said Lane. The average price for all homes sold in the area jumped 5.5% last month to $242,111.
Posted by Doug Pedlar at 11:38 AM No comments:

Detached-Home Starts leveling off in London

LONDON, May 9, 2011 New home starts were lower in the London Census Metropolitan Area1 (CMA) in April according to preliminary figures released today by Canada Mortgage and Housing Corporation (CMHC). Builders laid foundations for 133 homes compared to 224 in April 2010.  “While total new home construction in the London CMA moved lower, detached home starts leveled off,” said David Lan CMHC’s Senior Market Analyst for the London CMA. “On a year-over year basis, detached home starts were down by nine per cent in April compared to the 46 per cent in March 2011. Contrary to the trend elsewhere, starts were up in St.Thomas” added Lan.
Posted by Doug Pedlar at 11:32 AM No comments: