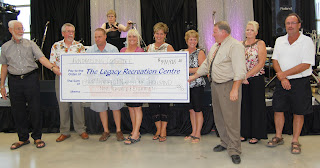 Jeannette and I attended the Grand Opening of the Legacy Centre last Sat. July 23rd and what a great place this is going to be for Lambton Shores and the Thedford area. The ice surface of the original arena is still there, but that is all! With new dressing rooms, viewing area and glass around the rink, it looks like a new place. Plus there is the Library, Children's Daycare Centre and the new hall, which should become the meeting place, for the area. There was a great turnout for the opening and even though the power went out because of the tornado, the new generator kept everything happening. Hope you are able to enjoy the Centre yourself this coming year. (Lynda Hillman-Rapley from the Advance supplied the photo)
Posted by Doug Pedlar at 2:33 PM No comments:

Golfing in the Heat at Camlachie 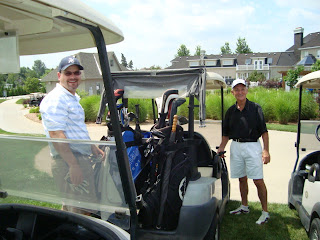 Our Real Estate Board from London (LSTAR), was invited to the Sarnia Real Estate Boards golf tournament last Thursday on the hottest day of the year, July 21st and it was like "HOT". Gerry Weir and Greg Harris from LSTAR helped us get through the day and we drank a lot of water!
Posted by Doug Pedlar at 4:02 PM No comments:

The Wheat is being Harvested here in Southwestern Ontario 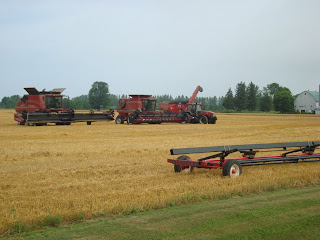 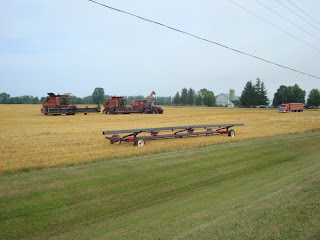 Summer is really here when the winter wheat is harvested. This is just north of Grand Bend along Highway 21 and as you can see the crop is off and from what I have heard, this could be a bumper crop.
Posted by Doug Pedlar at 3:55 PM No comments:

Not So Pro Beach Vollyball in Grand Bend 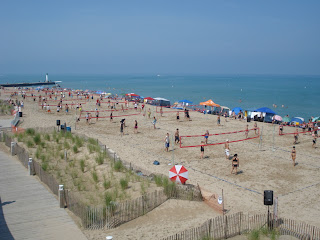 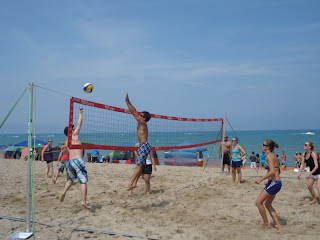 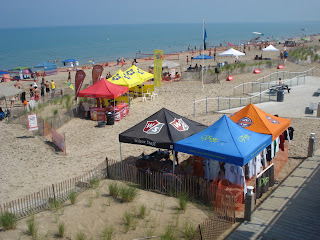 Another great weekend here in Grand Bend with the Vollyball on the Beach. There were lots of teams and fun on the beach as you can see. The "RE/MAX" team didn't do so well as Mark and Garrett and their freinds got a good suntan but didn't win too many games. Nice to see lots of things to keep everyone busy this summer, and the weather was perfect.
Posted by Doug Pedlar at 10:14 AM No comments:

There are Deer in Grand Bend

Just listed this property in Grand Bend and as we were taking photos this deer was watching us, wondering what we were doing!
Posted by Doug Pedlar at 2:56 PM No comments:

CBC News ...Canada's household credit is on pace to grow at its slowest rate in a decade, according to a new report released Thursday. CIBC Economics estimates that Canadians will add approximately four per cent to their outstanding debt - all from new mortgages - in 2011. If correct, that would be smallest rise in personal borrowings since 2002, according to CIBC economist Benjamin Tal and the author of the report.
"In fact, inflation-adjusted non-mortgage consumer credit is now rising at the slowest pace since the early 1990s," Tal wrote. That trend would be welcome news for the Bank of Canada. In the recent past, Bank Governor Mark Carney has publicly warned Canadians about the threat from building up too much individual debt, especially if interest rates rise late in 2011 to reduce inflation. Tal calculated that the slowdown in national consumer credit has been driven by Canadians opening fewer lines of credit, up only six per cent. That is the smallest increase on record. As well, growth in outstanding credit cards has been minimal, Tal reported, up less than one per cent in the year. Here, new limits imposed on borrowers by the card companies have crimped any debt increase in this area. The one growth area - home mortgages - is where accumulated debt is rising at a 1.8 per cent clip, or twice as fast as individual income growth, which stood at 0.9 per cent during the same period. But, rising mortgage debt was mitigated by the concurrent rise in the value of assets held by Canadians, according to the CIBC. That means the worth of an individual's house and that person's stock and bond portfolio is increasing at approximately the same pace as his or her mortgage debt is growing. "While debt is still rising faster than income, it is not rising faster than assets. The net worth position of Canadians has improved in the first quarter in absolute terms and relative to income," Tal said
Posted by Doug Pedlar at 2:29 PM No comments:

Nine hundred and thirteen homes exchanged hands in June: 741 detached homes, up 12.3%, and 172 condos, up 10.3%. "It's the best month this year and right in line with pre-Recession levels," says Jack Lane, the President of the London and St. Thomas Association of REALTORS®. "The market is definitely heading in the right direction." Residential listings taken last month numbered 1,746, up by 11.2%. "The uptick in listings is just further proof, that we are in a balanced market, one that’s good for buyers and sellers alike," says Lane. London was not the only City to have a good June. St. Thomas’s sales were up by 15.9% and its average house price Year to Date came in at $187,019, up 2.8%. This month, as in previous months and years, homes in LSTAR’s jurisdiction maintain their affordability compared to other major Ontario and Canadian centers.
Posted by Doug Pedlar at 1:50 PM No comments:

The London Free Press reported that after a chilly spring, the London area real estate market started to heat up in June with a 12% jump in sales compared with the same month last year. The London St. Thomas Association of Realtors (LSTAR) said Tuesday 913 homes sold last month. The breakdown was 741 single-family homes and 172 condos. June was the first month this year when sales topped 2010 levels. “It’s the best month this year and right in line with pre-recession levels. The market is definitely heading in the right direction,” LSTAR president Jack Lane said. Lane said he expects the improvement to continue in the second half of the year. “I think the rest of the year will be consistent — a nice steady marketplace.”
Posted by Doug Pedlar at 11:37 AM No comments: