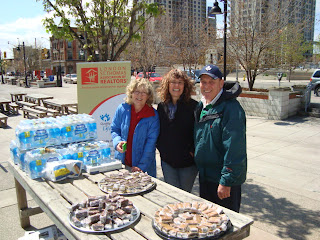 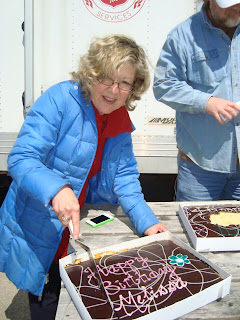 President Barb Whitney, Melissa from London St. Thomas Association of Realtors (LSTAR) and myself helped feed the homeless in London yesterday. LSTAR sponsored the annual event that was held at the Covent Market in downtown London on York Street. We served goodies, bottled water and Melissa's birthday cake.
Posted by Doug Pedlar at 2:23 PM No comments:

OTTAWA – April 16, 2012 – According to statistics released today by The Canadian Real Estate Association (CREA), national resale housing activity edged higher in March 2012.
Highlights:
• Home sales rose 2.5% from February to March.
• Actual (not seasonally adjusted) activity stood 1.6% above levels in March 2011, the smallest year-over-year increase since last April.
• The number of newly listed homes eased 0.3% from February to March.
• While still well balanced, the national housing market tightened due to the rise in activity.
• The national average home price edged down 0.5% on a year-over-year basis in March.
Sales activity over MLS® Systems of Canadian real estate Boards and Associations rose 2.5 per cent from February to March 2012. The increase lifted national activity to its highest monthly level since April 2010.
Posted by Doug Pedlar at 12:21 PM No comments:

In March, local real estate sales decreased 4.8% over those of previous year, with 623 detached homes and 147 condos exchanging hands over the course of the month. Detached were slightly down by 3.7% and condo’s by 13.3%. “So, while this month’s figures are nothing to get excited about, they are also nothing to be concerned about. Slow and steady wins the race” says Barb Whitney, President, London and St. Thomas Association of REALTORS®.
“The number of active listings at month’s end was up by 2.5% – our inventory or supply of available homes. This is the kind of market REALTORS® like to see – lots of activity. Sellers see that properties are moving at a good pace and buyers have a wide array of choices. In other words, our local market continues balanced.” says President Barb Whitney.
Posted by Doug Pedlar at 11:00 AM No comments: